Tote bag with the CERN logo printed in blue in a side. 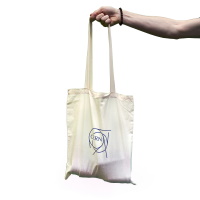